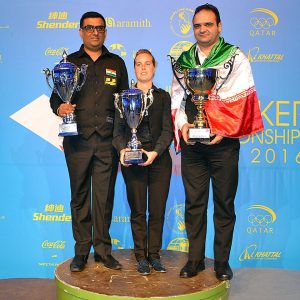 Iran’s Soheil Vahedi has won the 2016 IBSF World Amateur Championship with an emphatic 8-1 victory against Welshman Andrew Pagett in Qatar.

Having previously defeated Germany’s Lukas Kleckers, former pro Michael Judge and Declan Brennan in the knock-out stages, two of those matches in deciding frames, Vahedi raced into an early 3-0 lead in the final against Pagett.

Although Pagett, who qualified to play at the Crucible Theatre back in 2011, was able to claim the fourth frame with a run of 69, it was the 27-year-old Vahedi who from there won the next five frames to secure a comfortable win against the ex-professional.

Vahedi follows in the footsteps of compatriot and current professional Hossein Vafaei Ayouri, himself a winner of the IBSF competition back in 2011 and will be nominated to receive a two-year card on the World Snooker professional tour for the 2017/18 and 2018/19 seasons. He also becomes the seventh consecutive player from Asia to the win the game’s biggest amateur title.

The Women’s Championship was won by Belgium’s Wendy Jans, who defeated Amee Kamani from India 5-0 in the final.

There was however success for India in the Masters event, won by Dharminder Lilly following a 6-2 success against Welshman Elfed Evans.

Photographs courtesy of the IBSF.