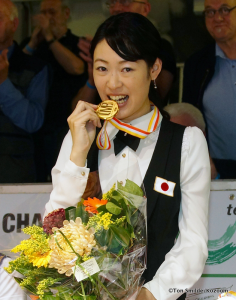 ZOERSEL – The 41-year-old Japanese Orie Hida was the first ever world champion in women’s three-cushion. Thirteen years later she returned to the highest stage in Zoersel (Belgium) this Sunday afternoon. Her emotional feelings were intense and modest when the Japanese anthem sounded through the playing room. With her victory, she took her fourth world title in total. The Asian winner dethroned Dutch Therese Klompenhouwer after two titles. 20-year-young Korean Mi Rae Lee couldn’t deal with the pressure in a final match like last year.

On the closing day of the 7th World championship, Orie Hida first defeated Gülsen Degener in a thriller with a one carom difference (30-29 in 47 innings). The tiny Mi Rae Lee, who looks like a sweet and nice schoolgirl, seemed to be ready for her first gold rush after her win over Danish Marianne Mortensen (30-8 in 26), but paled in the final. The more than twenty years older Japanese was the best in the match between two stylish, but rather slow players, 30-19 in 37.

The gentle smile on the face of the new champion was accompanied by endless bends to her opponent, the referee the spectators in the well filled playroom of De Kapel. Much more than an ’I’m so happy’, with the eyes closed, she could not share with reporters and later in front of Kozoom’s cameras. The unmarried Japanese, who revealed in the previous World Cup that she would like to get married and get a baby, is an example of simplicity and kindness in the selective company of ladies billiard.

She was proud and happy with her title, not with the level she played. Neither were all the sixteen players in the field. No one of the players finished over one average, only dethroned Therese Klompenhouwer was close with 0.980. The highest run (eight) was shared by Orie Hida and Mi Rae Lee, who closed her match vs Marianne Mortensen with the best tournament run.

The Danish, for the first time on the World stage, showed up with a small miracle when she outplayed Therese Klompenhouwer, the top favourite at the start. The Dutch was even more disappointed when she saw Mortensen only score eight times in the semi-final and didn’t reach 0.400 of average.

The Asian final makes clear that ladies billiard in South Korea and Japan has more and younger talents than Europe. Therese Klompenhouwer was the only one to break the hegemony with two consecutive titles in 2015 and 2016. The future of ladies three cushion, also emphasized by Orie Hida, is in the hands of Mi Rae Lee, who demonstrated in this tournament her wonderful technic and stroke, but struggled too many ups and downs and couldn’t strike at the decisive moments, like in last year’s final against Therese Klompenhouwer.