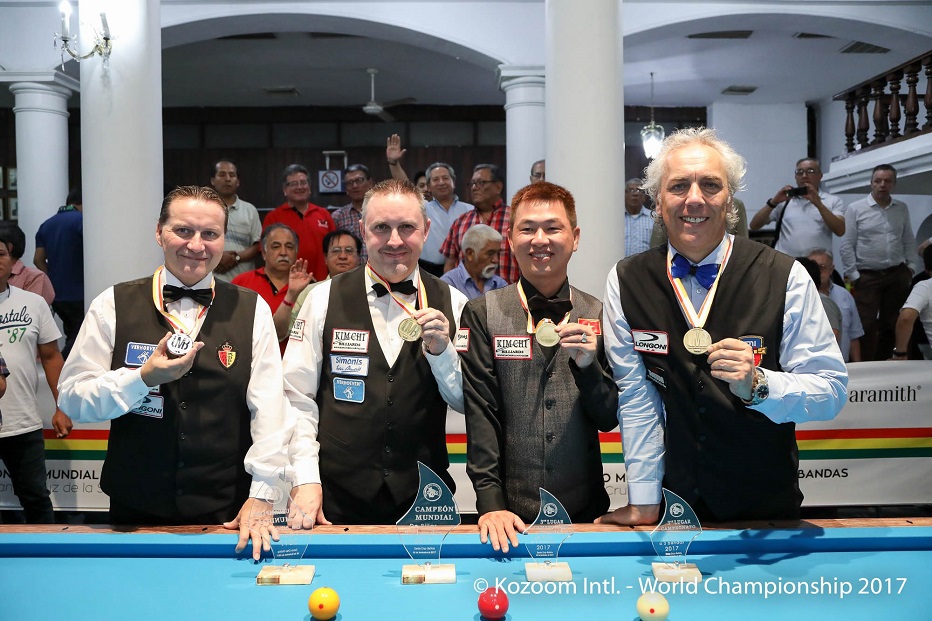 28.09.2017 – Santa Crus (Bolivia) – Two Belgian world stars in three cushion were the final players for gold at the World championship in Bolivia. The historic final was won by Frédéric Caudron, who beat Eddy Merckx in a sovereign match, 40-16 in 9 innings (4.444 against 1.777 average). The 70th championship in the long history went to a show down that rarely has been displayed. Twice, long time ago, two Americans (1936) and two Argentines (1938) met each other in a WC final. The Belgians, with Raymond Ceulemans as the record holder (21 titles), are by far the most successful billiards nation and added a new golden chapter to the history of billiards and three cushion in Santa Cruz.

The coup on the final day, with three Europeans and one Vietnamese, brought Frédéric Caudron not only to the highest stage. The 49-year-old Belgian also became the new world’s number one on the ranking. With his victory, he not only dethroned the Spaniard Dani Sánchez as the reigning champion, but also as the new world ranking leader.

n the authentic arena, with some 200 spectators, Caudron crowned himself champion in a tournament in which he beat in the knockouts successively the Swede David Pennor (40-27 in 27), the Korean Jae-Ho Cho (40-33 in 20) , the Spanish title defender Dani Sánchez (40-18 in 18), the Italian Marco Zanetti (40-36 in 26) and finally his country man Eddy Merckx.

Frédéric Caudron showed his world-class most of all in the ultimate match for the most desirable title: the Belgian clash with the also 49-year-old Eddy Merckx, was one of the fastest and best finals ever played. After 3-2 in two innings, Caudron launched his unstoppable attack with consecutive runs of 14, 5, 4 and 9: 32 points in 4 innings for 35-6 in 6. Three innings later, with 2, 2 and 1, the Belgian was showered with praise when he finished with a final score of 40-16 in nine innings. 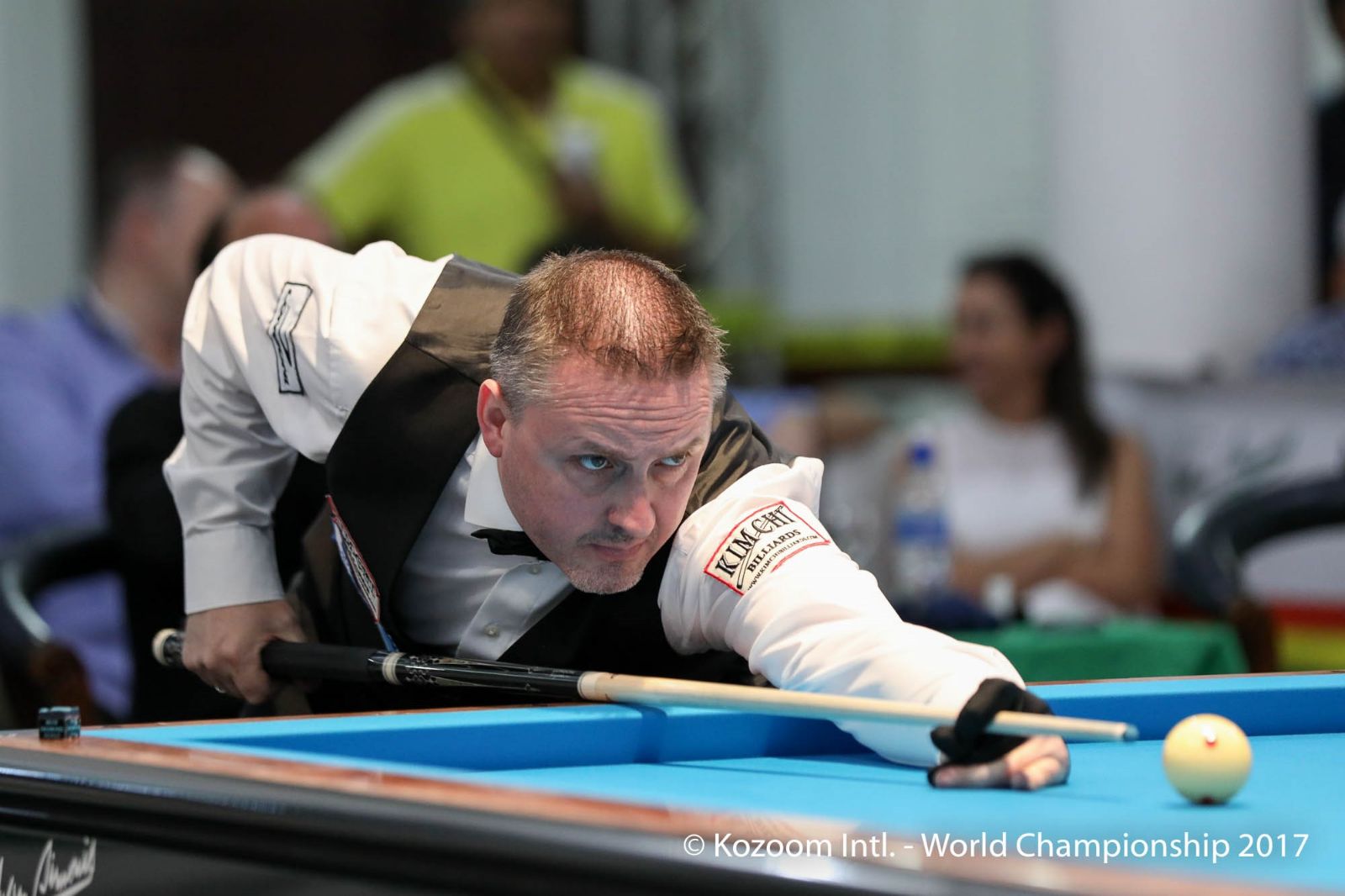 The new champion spoke a few (comforting) words after the match with Eddy Merckx, with whom he delivered so many heroic fights in their career. Then, Caudron raised his cue and shared the victory with his fans and the audience. The stage for the ceremony consisted of the two Belgians, Marco Zanetti and Minh Cam Ma, who were defeated in the semi-finals by Caudron and Merckx.

The other highlights at the World championship were the performances of Javier Vera, the rather unknown, 50-year-old Mexican, who came to the best eight in the tournament. The final day was mainly European-coloured, with the striking absence of the Koreans among the last eight of the tournament.

The championship, for the 19th time in an American country, had with its organization a difficult start. The location was changed at the last moment, there were problems at the airport to get the new Rafale billiards and Kozoom’s camera in the hall, but with a slight delay, the tournament could finally start .

UMB President Farouk Barki said at the end: ,,We had a lot of trouble in the first days when we arrived in Santa Cruz. I have to thank the Kozoom and Gabriels teams, that we worked together very hard to make this world championship continue. The location is of course not like in Europe or Korea, but I can say we have a beautiful arena in a very old building. The conditions for the players were excellent. We’ve been able to see the great parties and high scores. The two major surprises were Javier Vera from Mexico and Minh Cam Ma from Vietnam.”

The semi-finals reports on the last day:

The rarely seen gesture of joy that Eddy Merckx showed after the match, pointed out the tension in the final part. The match itself had an up-and down score for both: Minh Cam Ma sprinted away from the start, made 11 in his third inning and went into the break 21-4 ahead. But after the stop, the invisible Merckx suddenly came to life. The stoic Belgian forced his opponent on his chair, starting with three runs of 6 in a row. The rocket-starter Ma lost all his control. Merckx slightly continued with three times three, eight when the Vietnamese (from 23-5) only scored 3 in 7 innings. The ‘easy win’ was in Merckx’ hands at 39-31. And then Ma, unexpected, came with a revival. He had the finish in sight, but at eight points, he missed out for his his last (39-39). Merckx finished with one and Ma forced the draw with one.

The shootouts turned into a short and nervous battle. Merckx started the penalty’s with 2 and missed his third, with a left-handed shot. Ma scored twice and missed the winning point. Merckx then ran 3 for the second shootout, sat down on his chair, awaiting Ma’s equalizer. The Vietnamese made the breakshot, but missed his second: a round the table shot, which was just lacking.

The typical reaction after Merckx took the win: ,,I was pretty far behind and was shocked that I could come back so well. When Ma would have finished in ten, I had to accept my loss. But eventually I could finish it off. That’s good for my ranking, to reach the final, because I had to win the World Cup in Vietnam to be here at the start.”

For the third time in his career, Eddy Merckx reached the final at a World championship: one time he lost to Kasidokostas in Lausanne, two times he won the gold in Sankt Wendel and Porto.

Frédéric Caudron-Marco Zanetti 40-36 (26)
The expected top billing between two former Agipi team mates was marked by an extremely slow start. The match was mostly tactical, with lots of defence. Bot players couldn’t get control over the match. The starting score (5-4, 14-12, 18-18 in 14) kept the two giants in balance, it was all waiting for the first big attack, which eventually came from Caudron.

The Belgian, with a historic World championship final against Eddy Merckx in mind, was still 31-26 behind in 22 when he launched his attack with 9 for 35-31. And because Zanetti couldn’t answer, Caudron wasn’t in danger for his home stretch to 40-34. The equalizer gave Zanetti another chance, but the Italian missed after two points and remained at 40-36.

For Caudron it is his third World championship final after two times gold in Bogota and Antwerp.